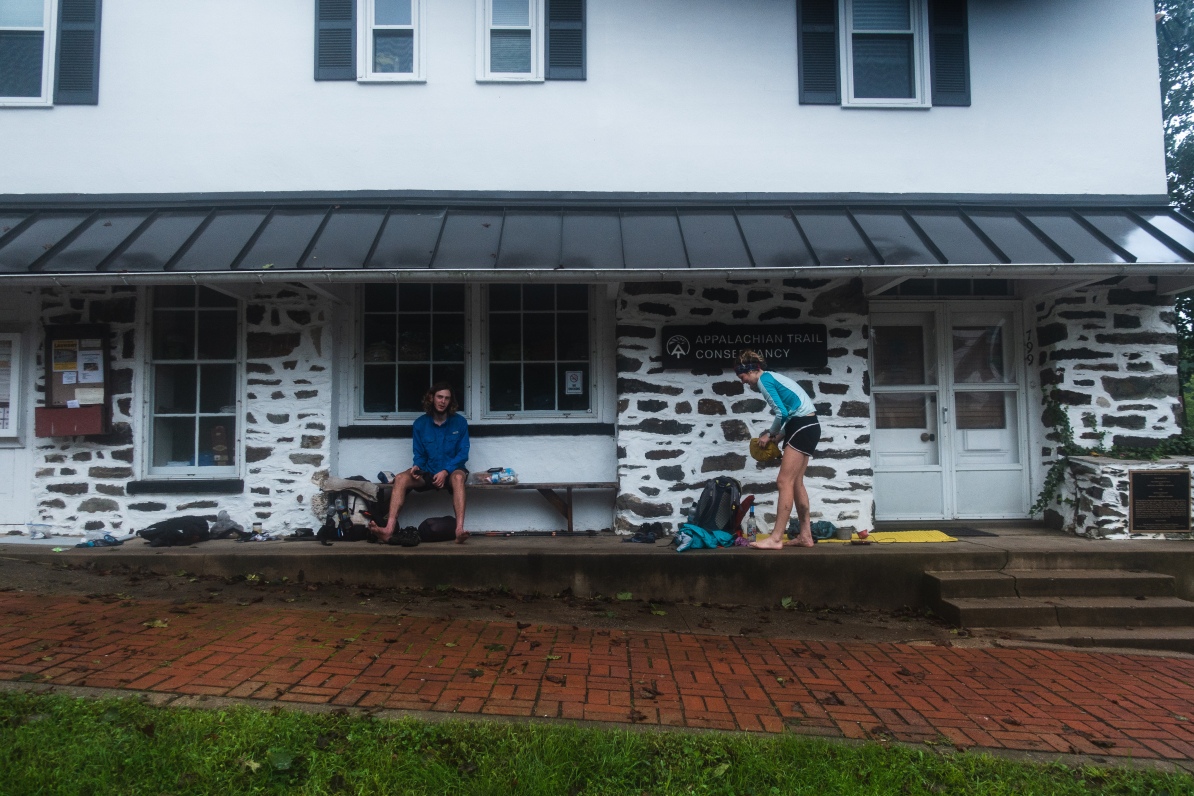 Sun Chaser and I had just gotten to the Mason/Dixon line (Pennsylvania/Maryland border) when we got a message from Spirit. “The bridge is open”.

The Potomic River footbridge had been closed due to flooding. It was now open again. Sun Chaser wanted to do the Maryland Challenge, hiking all 40+ miles of Maryland in a 24-hour timeframe. I was reluctant, to no good use. Without much effort, he convinced me to go for it.

Hurricane Florence was approaching and we had gotten in touch with a relative to Sun Chaser who lives in Virginia. She offered to house us until the storm passed. Instead of doing 11 miles to where we were being picked up, we changed the pickup location to Harpers Ferry. We waited 10 minutes until Spirit showed up and we shared our updated plans. She agreed to the challenge somewhat reluctantly.

We started walking at 12:15 pm. Yes, 12:15 pm. We didn’t expect to be walking more than 11 miles that day, and therefore it was just past noon. Maryland began with a climb, in true AT-fashion. After that, a lot of the day blended together, as it does when the terrain doesn’t change much and a decent amount of distance is covered. It was a foggy and wet walk with plenty of rocks. Almost Pennsylvania-esque.

At 7 pm or so we were halfway through, walking most of the time with each other. Something we usually don’t do. We would need to night hike a lot. Staying together was in the best interest of everyone.

We took a break at a Washington monument as the sun was setting. I taped my feet with Leukotape and hoped for the best. My shoes were brand new because I’m smart like that. What better way to break in a pair of thin, minimalist shoes than on my longest day of hiking so far?

After snacking, breaking, and taping feet for about 25 minutes we started walking again, this time with headlamps on. Both Spirit’s and Sun Chaser’s headlamps were insufficient, however, so we more or less relied on mine. We all felt pretty good at 8 pm with less than 20 miles to go. As nightfall emerged, the walking got significantly slower.

A few hours later, a state park with massive ruins and a restroom provided a good place for a break. When we started moving after this one, we felt nowhere near as skippy as earlier. I think we had about 10 miles to go from there. Feet were hurting and the fact that it was around 11 pm had started catching up. Seeing that we normally don’t go to sleep any later than 9 pm, let alone walk 30 miles after noon, sleep deprivation was unavoidable.

Somewhere around midnight walking became exponentially more difficult. I mean close-to-giving-up-difficult. Every step felt like lifting boulders and the constantly rocky trail had made my feet mushy, tender, and sore. My head was throb-aching and I could barely keep my eyes open. Zombie-walking, on sheer willpower, after what felt like going downhill forever, we made it to the bike path into Harpers Ferry and the end of Maryland. We allowed ourselves a sigh of relief. Little did we know that although the bike path is flat, it is actually eternal and has no end. No living person knows for sure where it ends, or if it even does.

At one point during this infinite walk of constant struggle, Sun Chaser apparently tried talking to us, but we were both somewhere else completely, in a land of rest and comfort, where Maryland couldn’t hurt us anymore.

Despite pebbles feeling like nails in my feet, legs acting like spaghetti and my cranium merely containing soup that used to be my brain, we made it to the bridge over the Potomic River and into Harpers Ferry. We crossed the bridge into West Virginia, delusional with tiredness, while scream-singing “Country Roads”, as is required per AT law. We had been waiting for that moment for a long time.

Not having any place to stay, we located the Appalachian Trail Conservancy Headquarters. It was nearly a mile uphill and also nearly the end of me. I have taken few steps that felt so heavy and hurt so bad. But low and behold, we made it up that mountain of a hill.

We arrived at 3 am. I tossed my suddenly comfortable 1/8 inch sleeping pad onto the concrete porch of the ATC and fell asleep immediately, cowboy camping right in front of the (emotional) halfway point of the Appalachian Trail.